EZYX, A DIY- P2P (MEMBER) SHARE TRADING PLATFORM
For the purpose of legal clarity, we must make it clear that EZYX does not (1) act as a "Market Maker" in the securities of any company whatsoever, (2) does not charge any brokerage fee and (3) does not give financial advice to any party whatsoever. During our current pre-digital phase, we do provide a DIY capital raising template which includes an offshore IPCOM (Intellectual Property Owning Company) in CO if required. An IPCOM can be owned by any non-resident of Colorado. The two year program base fee is US$50k which prepares an Applicant Issuer to go to the market using a DIY-P2P process that complies with jurisdictional legal requirements in the state of Colorado. Post digital launch, the EZYX system will offer Trading Member only accessible P2P introductory and matching facility that enables these members to buy and sell shares (securities) held by our Trading Members in privately held, ECF funded companies through what is called a "Secondary Market" in the securities industry. In the US, this trading is governed by Rules 147 and 144, both of which are now moving through a review process that will in all probability see further amendments in the light of the rapid growth of both intrastate and interstate (Federal) equity-crowdfunding laws across the US that promise to progressively disrupt the atavistic broker-centric model that has now passed its use-by date. This means that Members of the Cooperative will be able to trade their shares on a P2P basis once the system goes live

EzyXchange Ltd is registered with the Colorado Division of Securities as an Crowdfunding Intermediary under the Colorado Crowdfunding Act (HB-15-1246) (Pending ongoing changes to both Federal & State ECF legislation, we currently focus on DIY centric Rule 501 private placement projects in the Rule 506 and Rule 504 space where social-media P2P can play a role in the subsequent Rule 144 secondary market sector)

The country is a small producer producing circa 10 tons per annum compared to the more then 900 tons of "tea-tree" oil produced in Australia. The sub-tropical lands in the "winterless north" of the North Island are ideally suited to the development of whanau owned & operated micro-agri-biz orchards for the production of manuka oil for the health, wellness & beauty industry.

We are doing this because traditional landowners have been inexorably squeezed out of their natural resource treasure (taonga)  through legislation that was crafted to deliver this objective (kapuapa). This situation is aggravated in NZ through poorly crafted land laws that have served to economically marginalize Maori landowners from economic benefit acretion through their land (whenua) ownership for over 150 years. Legislation that mitigates against banks being able to lend on land owned by Maori. A totally unacceptable situation that prevents Maori from profiting from their lands. 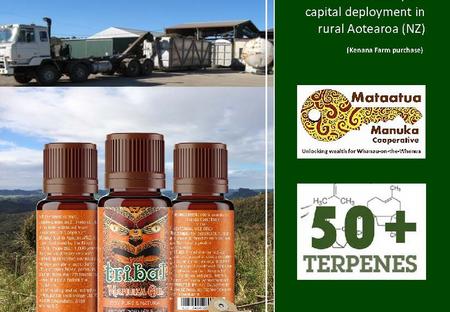 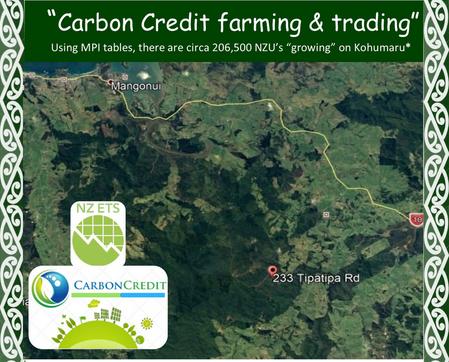 Come back soon to note our progress.

Plantations such as the one shown as the background in the image above  flourish in the tropical bays in the far north of Aotearoa/NZ creating an excellent income source for Maori whanau for current and future generations in accordance with Kaitiakitanga.